6 Reasons Why Your Child Didn’t Get Invited to the Party. 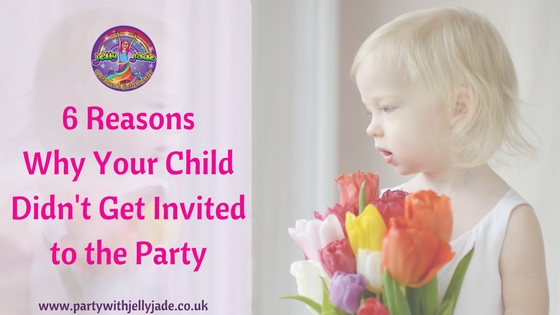 As a mum myself, my children have been left out of several parties when the whole class has been invited so I understand how upsetting it can be being on the other side.  Wondering why my son wasn’t invited and how dare they do this to him!
But, let me get something straight, it is about how we react to these situations that helps our children and as long as we understand the reasons why someone didn’t invite your child, then this will help your child with their social skills in life.
This blog post has been re-written and adapted as my children have got older and the party industry changes but the six reasons here still apply, so please bear these in mind if you are upset that you child didn’t get invited, there is usually a very good explanation –
1 –  Limited Budget – not everyone can afford a lavish party and if it is not a party in a hall, where there is free reign to invite as many as possible, then parents usually have to pay per child if it is a soft play centre or party package somewhere.
It works out extremely expensive when you usually have a minimum of 10 children to invite and it is not intentional when parents have to be choosy when inviting select friends.

2 – You’re not social with other parents – I believe, personally, that this has had a knock on effect on my eldest child as I never involved myself with the parent at his school.  Therefore, they would usually invite the whole class to a party and leave him out because, well, maybe out of sight, out of mind?  Who knows, but it didn’t mean I was going to be in with the crowd just so my son could fit in.  If they really wanted him there, then they would have invited him no matter if his mum was friends with their parents.  This is a tough one to overcome, but it teaches our children not to adapt themselves to fit in but rather be who they are and love themselves for it, eventually others will love them for it too.

3 – The children don’t get on – an obvious one but one that has been brought up in my forums, if your child is being bullied, why would they want to invite the bully to the party?  If both children don’t get on with each other, then there is no point inviting each other to things where the situation will be awkward and upsetting for both of them.

4 – No Room at the venue – whether the party is in someone’s home, or in a smaller venue, sometimes you have to be selective of who to invite.  Your child may not be first on the list but this is something us as parents have to deal with.  One of my bookings has a very small hall in which I am entertaining in.  Once I have my equipment out, there then needs to be performance space, room for the kids and parents.  It will be a tight squeeze which the parent has warned me about but has also asked about how to tell parents that siblings cannot come too due to room space.  We have to accept that if we have other children, that they cannot be expected to have an invite too.  Sometimes, if someone has a huge hall where there seems to be room for everyone and you stay with your other children, they would want to join in with the entertainment and possibly expect a party bag at the end.  The parents may have not planned for this and it would be very awkward at the end when your other children expect the same as their sibling who was invited.  I usually leave my youngest at home with his Dad if I take my eldest to a party but if I have to bring him, I either keep him with me or ask the host if it is ok.

5 – Their child was not invited to your party – tit for tat as they say and I don’t expect an invite if I haven’t invited a child to my son’s party.  I am starting to also get my head round not being invited even if we did invite them!  It is just the way it works and I wouldn’t like to think that people had invited my son just because we did theirs, but because they truly want my son’s company!  Being a parent can get competitive at times, even without us noticing but no one should be in competition with each other, in any sense, because we are all in this together!

6 – Everyone has a different situation – please bear in mind that some are single parents who either can’t afford to invite everyone, or don’t want to, some may be having a difficult time at home, some are happy to keep it between the family.  Don’t judge parents just because your child was not invited.  I made this mistake and realised I was a little harsh on my single mum friend.  She had to be selective and it was no big deal in the end.  My son makes his own judgements and doesn’t need me to speak for him all the time.  I am in a lucky position where I share budget of parties with my husband but I have been a single mum before and it broke my heart knowing I could not afford a lavish party where I could invite anyone.

The point of this post is to try not to get too hung up about who to invite, about leaving anyone out or being left out.  You can’t please everyone all of the time, and those that get upset about their child not being invited will soon realise that it is all part of life and it is how we deal with it that makes us a better person.  I could have confronted every child and parent that didn’t invite my children to their party, but what would that be teaching my children?  There are so many factors as to why my own children have been left out but I don’t take it personally any more.  Put yourself in their position and way up the situation.  If your child is really upset about it, sit and talk to them.  You will be an awesome parent for just listening and being there for them.

Want to join in with the conversation about this and other party ideas?

By continuing to use the site, you agree to the use of cookies. more information